This year we mark the 20th anniversary of the first, major production by the DSV Network, TrAPs predecessor. We are going back to the beginning, to take a closer look at the long-term effects of the work to increase diversity. How has the Norwegian cultural scene changed in our organization’s life-time? Where do we stand now? 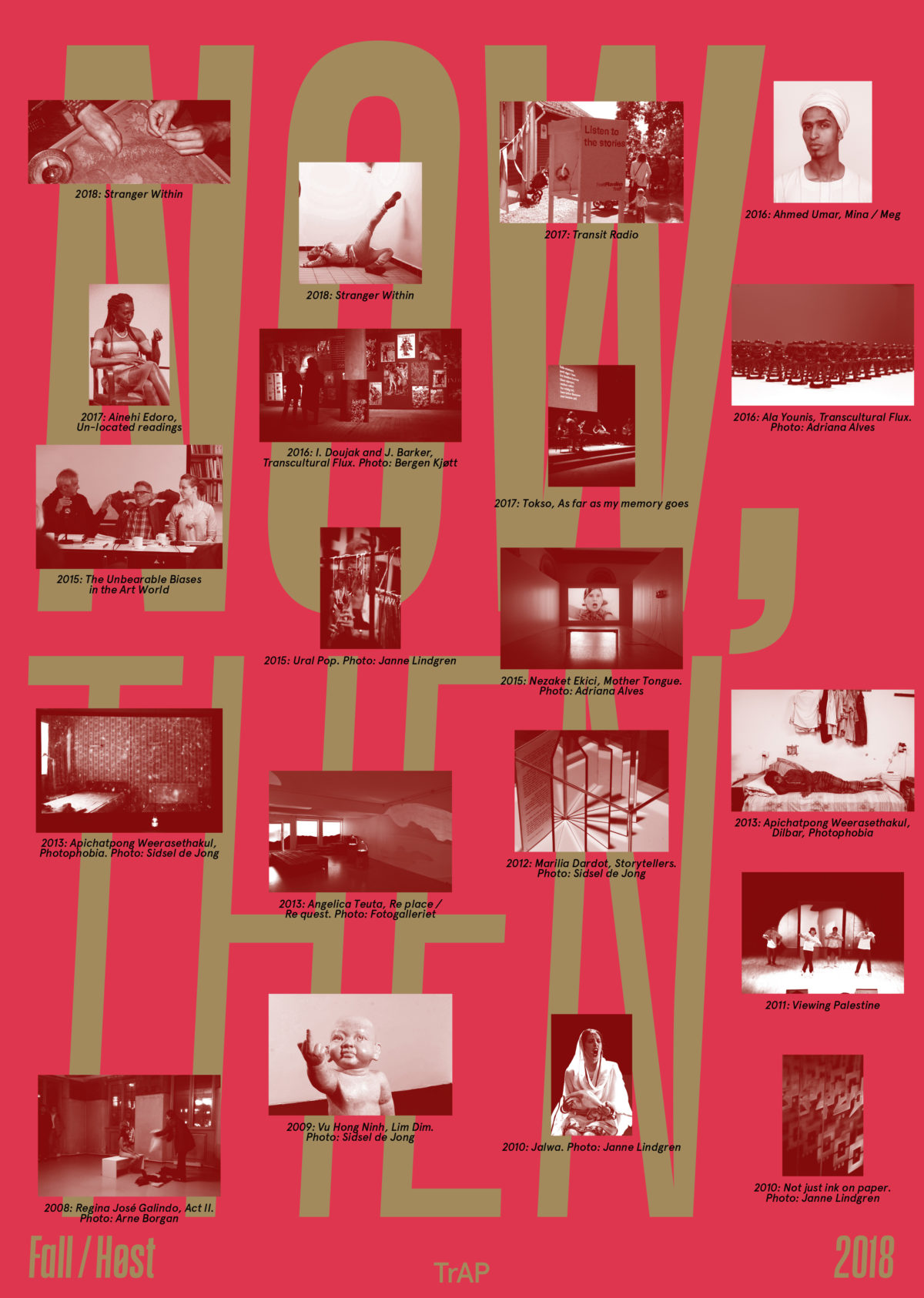 SCENEKUNST: Stranger within
Trondheim: Bastard Festival, KIT, September 11–14
Oslo: Interkulturelt Museum, October 11–19
Bergen: Oktoberdans, Hordaland Kunstsenter, October 23–24
Artists Mia Habib and Jassem Hindi have been travelling all across Norway for one year, offering to perform in people’s homes in exchange for a meal. In the process they have gathered countless stories and created new encounters between people and art in unexpected places. This has shaped the creation of their new performance, premiering at the Bastard Festival in Trondheim.

NETWORK: Here and there
Oslo: Launch party at Skatten, October 23 at 6 pm.
Launch of Here and there survival guide and program, with artist talks. This project will create a platform for newly arrived artists establishing themselves in Norway, through meetings, workshops, exchange of experiences and information and networking. To know more, contact project managers Marie Skeie – marie@herogder.org, and Motaz al Habbash, motaz@herogder.org

FILM PROGRAM: The courage to live
Tromsø: Verdensteatret, October 8–10
Oslo: Cinemateket, October 23-24
Trondheim: Cinemateket, October 26–28
— A conversation about freedom, migration and love. Migration is a phenomenon that has always existed and forms the basis of every society. In a new series of film screenings, we invite the audience to explore the core issues of migration and exile in a historical context. We will show four titles selected by Hanan Benammar and Brynjar Bjerkem.

CONVERSATIONS: Status Quo — the round table of the legends
First episode is launched online September 20.
In conjunction with the 20th anniversary of TrAP and our predecessors, Monica N. Ifejilika creates a series of conversations that provide an entertaining and informative overview of the development of culture in Norway over the last 20 years. The talks will take a scrutinizing look, with the best intensions, on the development that has taken place since international artists really began to claim their place as part of the Norwegian art scene.

CELEBRATION: Jubilee banquet
Oslo: Cafeteatret, October 18, at 6 PM
We will host a banquet to celebrate the pioneers in our field, and the fact that it has been 20 years since TrAP’s first major production. We take this opportunity to give credit to the known and less well-known names of those who have helped move Norwegian arts and culture in a more diverse direction. Would you like to participate? Register with post@trap.no before October 1st.

AUDIENCE DEVELOPMENT: Keys to the City
Oslo: K1, Tøyen. Date coming soon!
Keys to the City is a perennial project with the goal of presenting various opportunities in the cultural world for young people aged 15 to 25 living in east Oslo and Akershus. The goal is to create long-term relationships between the cultural institutions and the young people involved in this project.

AUDIENCE DEVELOPMENT: Keys to the City Goes Nordic
In collaboration with the Arts Council Norway, we have started a two-year Nordic collaboration around audience development in art museums in Norway, Denmark, Iceland, Sweden, Finland and Åland. Springing from our project, Keys to the City, cultural institutions in different countries will test methods to reach a more diverse audience. We will meet three times annually and share our experiences. The project concludes with creative community projects and a publication with experiences, strategies and practical results.

FESTIVAL: International Week
August 11–23, TrAP Tromsø and the Municipality of Tromsø collaborated to present a whole week of cultural activities, with concerts, cultural events, workshops and much more. See the full program at facebook/internasjonaluke

MUSIC: Back to School Festival
Tromsø: Stortorget, August 24. We created a free festival for all the pupils from the Upper Secondary Schools in Tromsø, in collaboration with DKS Tromsø and RakettNatt. Maxida Marak, DAGNY, Bendik and Gurls were among the artists performing.

There will be more projects in Tromsø the following months. See our events here.